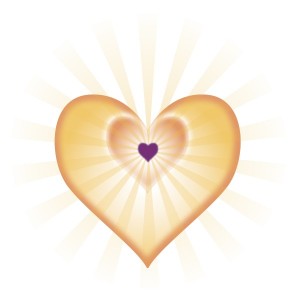 My daily practice for over ten years is heart-centering.  I use this as a daily ritual, which helps me to center and open, connecting with the Divine, with my inner guidance and with the heart center – where all is welcome, where the energy of the upper and lower chakras meet and there is no judgment.  I also use it when I’m in a situation where I feel off-balance, or fearful,  or where my ego/emotional self is in control, in a way that is not serving me. It always brings me back to the heart center, to a place of calm, compassionate, grace.

I love this practice because it is simple, anyone can do it, and it is very powerful and effective.

Begin by placing your right hand over your heart chakra and place your left hand over your right, with your thumbs meeting above.  See and feel your crown chakra open, at the top of your head, connecting with the divine energies of the sky, the heavens, the cosmos, the masculine…and now see and feel your root chakra open, at the base of your spine, connecting with the divine energies of the earth, the feminine/nurturing aspects.  Bring these divine energies up from the earth and down from the heavens into your body, meeting at the heart and then flowing down your arms and out your hands.  It then flows back into your heart in a beautiful circle…You can also visualize this energy flowing out your hands to others around the world, or place your hands on another person’s body to send them this healing energy.

The mantra to focus on while doing this are the four qualities of the heart center, as taught to me, and countless others by Dr. Brugh Joy:  Supernal Compassion, Innate Harmony, Healing Presence, Unconditional Love and Selfless Service.  Simply repeating these words, contemplating their truth, and bringing their essence into your being will change your experience of life.

this is a beautiful video with about one minute of Eye Deeksha with Bhagavan…enjoy!

Here is some helpful advice from Michael Milner, one of the Oneness Trainers in Florida concerning kundalini experiences and how to help move the energy through the physical body and energy bodies:

“Lee Sanella M.D., one of the pioneers of the Spiritual Emergency Network, in his book “The Kundalini Experience” explains a number of experiences he had helping people integrate kundalini awakenings. Bottom line, he found that the kundalini energy after reaching the top of the head needs to ground back down through the body (usually down the front of the body). When it reaches back down from the crown to the heart, that’s when the heart flowers according to OU teaching. When it reaches the lower belly (tantien or hara), virtually all side effects of kundalini vanish. When it reconnects with the root chakra, the serpent has completed a full circle like the ouroboros, the snake swallowing its tail, in a feedback loop, very powerful, very balanced! Taoists call this the microcosmic orbit. It keeps the kundalini circulating continuously in a full circle through all the chakras simultaneously, hence the person remains fully functional on every level of their humanity and fully grounded.

In Indian yogic traditions the kundalini is often raised up to 6th & 7th chakras and left there or somewhere above the crown chakra. This tends to leave people drooling & unable to function, with shakes, headaches, eye pain, sleep disorders, sexual disfunction, etc. Lying in shavasan will allow the energy to ground & integrate, but most Westerners do not take the 20 minutes or so required for that to be effective. In the book Vara Deeksha Mala (published by OU), Amma teaches a meditative counterpart to Chakra Dhyana called Parvathi Padma Dhyana meant to be practiced after Chakra Dhyana (for instructions see http://www.onenessmovementflorida.org/ParvathiPadmaDhyana.htm ).

Another alternative is the So-Ham mantra meditation taught occasionally by the guides at Oneness University (and taught by Yogananda & Muktananda and many other gurus). Inhale on “So” seeing the golden kundalini energy flowing up from root to crown, hold your breath briefly while you see the energy fountaining out the top of your head mingling with the Cosmic Prana, then exhale on “Ham” as it pours back down over the whole body, FEEL it coursing down through every part of your body body filling it with golden energy. Eventually, So and Ham, inhale & exhale, may merge into OM, breath ceases, and one enters the breathless state of Nirvikalpa Samadhi.

OR Taoist breathing (this has been my life-long sadhana): Tongue curled, tip touching the center of the hard palate in the roof of the mouth. Inhale feeling the energy flow up the spine through the top of the head, exhale feeling it flow down the front of the body to the lower belly (tantien = sea of elixir). I have practiced & taught this for about 40 years to many people having difficulties with kundalini, and like Dr. Sanella, I have discovered it really works to bring balance & eliminate kundalini side effects. It leads ultimately to a state in which it is entirely possible to stay in nirvikalpa samādhi and yet be fully functional in this world. This condition is known as sahājā nirvikalpa samādhi or sahājā samādhi. According to Ramana Maharshi, “Remaining in the primal, pure natural state without effort is sahaja nirvikalpa samadhi”. Taoists call it “wu wei”, the natural human state, which means “not doing” or spontaneous effortless
action, naturally doing the right thing at the right time without thought or effort.

One last thing, the nausea issue: When Kundalini energy is flooding the 3rd chakra people often feel nausea. 3rd chakra involves power & control. They feel this energy out of control and it is probably activating some blocks or charges in the 3rd chakra area. If they think “something is wrong, this needs to be fixed” & resist or struggle with it, nausea often results. If they are encouraged that nothing is wrong or needs fixing, let it be, just relax, stop fighting it, let it happen, breathe, feel it, embrace it & experience the charge (energy) without resistance, it transforms almost instantly from nausea to pure blissful energy. It’s sort of like going on a roller coaster. When you go over the top, rushes hit your tummy. Resist it and you may throw up. Surrender & you experience joyful euphoria”