This story is about Dr Ihaleakala Hew Len and some extraordinary experiences he’s had using ho’oponopono – an ancient Hawaiian practice which means to clean or clear, to make right, and be aligned. He uses a modern, simplified version of this practice which I have found to be incredibly helpful.

For facilitated, in-depth work with ho’oponopono, I highly recommend a session with Zelie Kuliaikanu’u Duvauchelle. Her sessions are unique, extremely powerful and transformative. She does sessions in person on Maui and Moloka’i, Hawaii, as well as from a distance, working by phone.

“Two years ago, I heard about a therapist in Hawaii who cured a
complete ward of criminally insane patients–without ever seeing any
of them. The psychologist would study an inmate’s chart and then look
within himself to see how he created that person’s illness. As he
improved himself, the patient improved.

“When I first heard this story, I thought it was an urban legend. How
could anyone heal anyone else by healing himself? How could even the
best self-improvement master cure the criminally insane? It didn’t
make any sense. It wasn’t logical, so I dismissed the story.
“However, I heard it again a year later. I heard that the therapist
had used a Hawaiian healing process called ho ‘oponopono. I had never
heard of it, yet I couldn’t let it leave my mind. If the story was at
all true, I had to know more. I had always understood “total
responsibility” to mean that I am responsible for what I think and do.
Beyond that, it’s out of my hands. I think that most people think of total
responsibility that way. We’re responsible for what we do, not what
anyone else does–but that’s wrong.

“The Hawaiian therapist who healed those mentally ill people would
teach me an advanced new perspective about total responsibility. His
name is Dr. Ihaleakala Hew Len. We probably spent an hour talking on
our first phone call. I asked him to tell me the complete story of his
work as a therapist.

He explained that he worked at Hawaii State Hospital for four years.
That ward where they kept the criminally insane was dangerous.
Psychologists quit on a monthly basis. The staff called in sick a lot
or simply quit. People would walk through that ward with their backs
against the wall, afraid of being attacked by patients. It was not a
pleasant place to live, work, or visit.

“Dr. Len told me that he never saw patients. He agreed to have an
office and to review their files. While he looked at those files, he
would work on himself. As he worked on himself, patients began to heal.

“‘After a few months, patients that had to be shackled were being
allowed to walk freely,’ he told me. ‘Others who had to be heavily
medicated were getting off their medications. And those who had no
chance of ever being released were being freed.’ I was in awe.’Not
only that,’ he went on, ‘but the staff began to enjoy coming to work.
Absenteeism and turnover disappeared. We ended up with more staff than
we needed because patients were being released, and all the staff was
showing up to work. Today, that ward is closed.’

“This is where I had to ask the million dollar question: ‘What were
you doing within yourself that caused those people to change?’
“‘I was simply healing the part of me that created them,’ he said. I
didn’t understand. Dr. Len explained that total responsibility for
your life means that everything in your life- simply because it is in
your life–is your responsibility. In a literal sense the entire world
is your creation.

“Whew. This is tough to swallow. Being responsible for what I say or
do is one thing. Being responsible for what everyone in my life says
or does is quite another. Yet, the truth is this: if you take complete
responsibility for your life, then everything you see, hear, taste,
touch, or in any way experience is your responsibility because it is
in your life. This means that terrorist activity, the president, the
economy or anything you experience and don’t like–is up for you to
heal. They don’t exist, in a manner of speaking, except as projections
from inside you. The problem isn’t with them, it’s with you, and to
change them, you have to change you.

“I know this is tough to grasp, let alone accept or actually live.
Blame is far easier than total responsibility, but as I spoke with Dr.
Len, I began to realize that healing for him and in ho ‘oponopono
means loving yourself.
“If you want to improve your life, you have to heal your life. If you
want to cure anyone, even a mentally ill criminal you do it by healing
you.

“I asked Dr. Len how he went about healing himself. What was he doing,
exactly, when he looked at those patients’ files?

“Let me give you a quick example of how this works: one day, someone
sent me an email that upset me. In the past I would have handled it by
working on my emotional hot buttons or by trying to reason with the
person who sent the nasty message.
“This time, I decided to try Dr. Len’s method. I kept silently saying,
‘I’m sorry’ and ‘I love you,’ I didn’t say it to anyone in particular.
I was simply evoking the spirit of love to heal within me what was
creating the outer circumstance.

“Within an hour I got an e-mail from the same person. He apologized
for his previous message. Keep in mind that I didn’t take any outward
action to get that apology. I didn’t even write him back. Yet, by
saying ‘I love you,’ I somehow healed within me what was creating him.

“I later attended a ho ‘oponopono workshop run by Dr. Len. He’s now 70
years old, considered a grandfatherly shaman, and is somewhat reclusive.
He praised my book, The Attractor Factor. He told me that as I improve
myself, my book’s vibration will raise, and everyone will feel it when
they read it. In short, as I improve, my readers will improve.

“‘What about the books that are already sold and out there?’ I asked.
“‘They aren’t out there,’ he explained, once again blowing my mind
with his mystic wisdom. ‘They are still in you.’ In short, there is no
out there. It would take a whole book to explain this advanced
technique with the depth it deserves.

“Suffice It to say that whenever you want to improve anything in your
life, there’s only one place to look: inside you. When you look, do it
with love.”

I love you, I’m sorry, Thank you, Please forgive me.

As Zelie and I are preparing for our next series of the Flowering of the Heart class this Sunday, I want to list some wonderful resources here. These will be used in our class, and will be useful for anyone interested in doing self-inquiry and self-reflection…

We have been doing The Work, a process from Byron Katie that is very simple, and very profound. It is a way of beginning to really hear our thoughts and judgments that are often playing in our head, and to question the truth and reality of them. This is way to begin doing The Work – we will go into it in much greater depth in the class.

You begin by making a statement, such as “My mother shouldn’t be so critical of me”, and then asking 4-6 questions:
1.Is that true?
2.Can I absolutely know that it is true? (this one usually shifts my whole thinking of the situation!)
3.How do I feel/react when I have this thought? (do I feel anger, disappointment, do I close myself off, distance myself from the person, etc?)
3a.Can I think of a reason to drop the thought? (don’t try to drop it, you really can’t)
3b.Can I think of a stress-free reason to keep the thought?
4.How would I feel without this thought – who would I be, if it were not possible to have this thought?

Finally, turn the statement around, finding 2-3 ways that feel as true or truer
example: “my mother should be critical of me” (since she is, and accepting that that’s the reality can bring great peace, and it is often serving in some way, even if we don’t like it)
“I shouldn’t be so critical of my mother” (often, we are judging someone else for what we are doing ourselves)
“I shouldn’t be so critical of me” (we are often actually judging ourselves much more than anyone ‘out there’ could possibly be)

Pay attention to the place where you feel a shift, where you have some insight or release, or feel some peace – then let it go, no need to analyze or intellectualize it, trust the work will unfold in perfect timing…

If you want to watch videos of the process and download forms to do the work with more details, see The Work, Byron Katie’s website. One of her books I recommend is “Loving What Is”.

Another great resource is James Wanless’ Voyager Tarot card site and set of cards. Zelie and I have been using these cards for over 10 years, and they continue to show us new insights and perspectives after all these years. His website has a “card of the day” feature, where you can ask about the energies of the day, or relating to a particular issue, and then click and have a card drawn that has incredible images to work with, as well as an interpretation to read. Even better to have your own set of cards, but this is one easy, free way to have access.

Soon I will post more about ho’oponopono, and Dr Ihaleakala Hew Len’s work with a modern adaptation of this ancient Hawaiian process. In the meantime, you can use these phrases anytime you are having a conflict or difficulty with a person, or even a situation or event (work, etc…): “I love you, I’m sorry, Thank you, Please forgive me.” Repeat each one 3 times, directing it toward the thought form, or the person. The order of the phrases doesn’t matter, nor do you need to feel or believe the statements – simply use these words, and you will see amazing shifts!

looking forward to seeing those of you in the class Sunday! blessings to all… 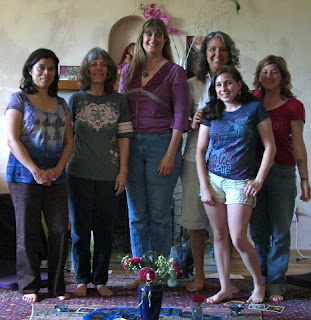 We were both joyful and sad to have the 4th of our first series of our Flowering of the Heart class a little over a week ago – it was wonderful to have such a beautiful group of women join us each week for deep exploration, laughter, meditation, discovery, and more… and we have missed them and our Sunday ritual already! However, we are happy to have another 4 week series starting soon, on May 24, as we continue our deepening process…

Here are the wonderful women who joined us for the first series!